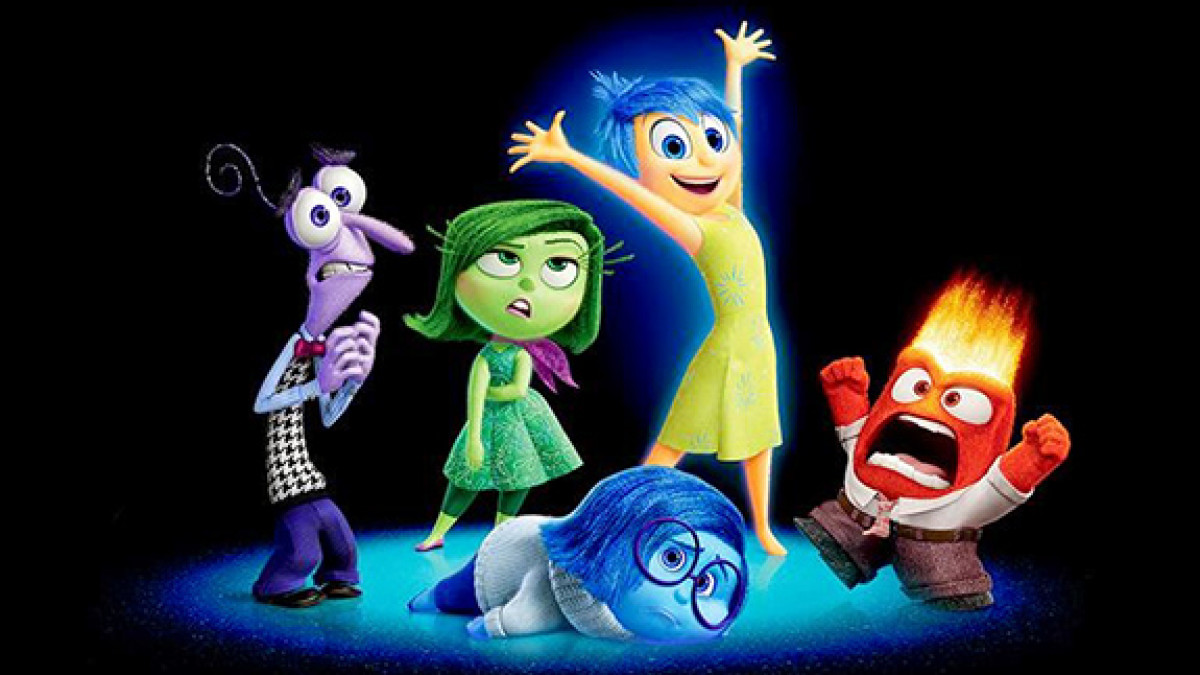 Have you seen the Pixar's Inside Out movie? What does it say about Personalities?

I watched Inside Out this past week for giggles...

This is a Pixar movie from the perspective of the Emotions inside of the brain, primarily the brain of 11-year-old Riley.

It loosely follows the “Nuture” school of thought for the development of personality.
Each “Core Memory” develops an Island of Riley’s personality: Family Island, Friendship Island, Hockey Island, Honesty Island, and Goofball Island.

This wasn’t the first time I’ve watched this movie, but I loved it then and I still do.

I laughed that the Characters playing Emotions were showing all of the emotions!

That's what the Enneagram tells us!

Be who you were designed to be, and work together as a community for the benefit of the community!

Anyhoo, with that said, you know I put on my Enneagram Goggles to guess their types.
(It's ok when they are FICTIONAL characters.)

This is a TRICKY but a good exercise in Type Studies because you want to be able to separate the character from the role they play in Riley’s brain. Just like our Leadership Style or Teaching Style or Parenting Style might be different than our Enneagram type, we must pay attention to adaptive behaviors that might overshadow the Core Type.

I tried to not spoil it in case you haven’t watched it, but it’s kinda impossible. I tried to be as vague as I could and still get my point across.

Joy is the first Inside character we meet. The most obvious choice for Joy would be a Type 7 since the core desire of a 7 is to be happy.

But if you watched her behavior patterns you might also guess a Type 2. Both the 2 and 7 are look-a-like Types in many ways.

Both are Cheerful, Positive Types and can find the silver lining in situations, both can be Care-Takers (SO 7s) and want to be taken care of (SP 2s), and they both become Angry/Passionate under stress.

When Sadness first shows up in HQ, Joy gets a bit uncomfortable and says,

And she inserts herself in front of the control button and takes over.

And even though she has a pride about her that She is the only one who can fulfill Riley's needs by leading "Team Happy" like a 2 might, Type 2s are comfortable expressing sadness, especially if it is going to help someone else. And they have a willingness and intuitive knack for it.

On the other hand, Type 7s are the ones that have a harder time understanding Sadness and might try to contain it at all costs. She also insists on waking up Riley with Positive and Happy dreams, instead of scaring her which would be more effective.

Joy also doesn’t have an initial “I got this” attitude like a 2 might project, but rather has to piece together her confidence first.

So I'm sticking with Type 7 for Joy.

EVERY type is motivated by a Core fear, but Types 5, 6, and 7 are fixated on Safety and Security.

With that said, in preparation of the first day of school, the character, Fear, presented a huge stack of papers of the researching and compiling of worst-case scenarios for Riley. That sounds a lot like a 5 and a 6.

But when Riley had to stand up in front of class to speak, which was one of the worst-case Scenarios on his list, he freaked out and begged Joy to take care of it saying,
“Pretend we can’t speak English.”

This withdrawing is a stress response of a Type 5 being caught off guard of not having all the answers. He is also the first one to run away from the problem when things really started getting messy later in the movie.

Type 6s would have a thought-out Solution for each Scenario “just in case” so that they and others feel supported and guided, instead of quitting or passing the buck to someone else.

So I choose Type 5 for the character of Fear.

"He cares very deeply about things being fair."

Even though types 9 and 1 are also in the Anger Triad, the most likely choice for the Anger character is Type 8.

Anger is protective of Riley, even if it means breaking rules. He’s content for someone else to be in charge (if they are competent). But when it came down to it, he took matters into his own hands by implanting an extreme idea in Riley’s head.

Type 8s can handle chaos and sometimes even provoke it to prove a point or get results, but not if it is going to hurt someone they care about.

The tricky part is that, in his Black-and-White / All-or-Nothing mentality, Anger doesn’t think the plan through completely before jumping into action.

However, when he realized things were getting way out of control, he admitted to the madness of his plan and took action to reverse it.

Finally, I want to point out at the end of the movie, he says...

Sometimes all an 8 wants is to speak their truth to someone who can keep up and not be offended.

So to me Type 8 is a clear choice for the character of Anger.

Disgust was the most fun character to type because it isn’t so obvious at first glance.

My first guess of what type she might be, solely based on the emotion of “disgust,” was the “Counter Phobic” 6 because of her vocal Suspicion, doubt, and intensity.

However I’m not a big fan of going straight to subtypes, so I looked for other clues to discern her Core Type first.

This is how Joy introduces her in the beginning:

"She basically keeps Riley from being poisoned. Physically and Socially."

This might make you think of the Type 3 who can be a social Chameleon.

She prompts Riley to reject Broccoli because it isn’t “brightly colored” or “shaped like Dinosaurs.”

At Riley’s new school, Disgust is able to spot the “cool kids'' through fashion trends and is aware of the “rules” of social acceptance…

Even her character’s stylish hair, attire, and extreme eyelashes suggest that she is motivated by appearances.

However, Poison prevention is a Safety measure.

“Ok CAUTION! There is a dangerous smell, people!”
"Well, I just saved ours lives...Yeah You're Welcome."

Another thing to note is that Disgust asks a lot of questions before making a decision, and she plays Devil’s Advocate when Anger executes his extreme idea to help Riley.

Her shock suggests “that is morally wrong” which could be Type 6 or Type 1.

She still went along with Anger’s plan even though her body language suggests she is uncomfortable with the idea. She is trusting Anger more than herself at that moment.

But as soon as he admitted to the madness of his plan, Disgust made the first attempt to save the day by trying to remove the idea from the control panel.

Finally at the end, she “tricks” Anger into using his Fire to rescue Joy and Sadness by “speaking his language” to prompt him to use his natural gifts.

This is a hidden super power that Type 6s have to help others (even if they struggle to do this for themselves.)

So I chose Type 6 for the character playing Disgust. If I wanted to be specific I would come full circle and land on Counter Phobic 6 (SX 6) which could also explain her attractive appearance and excitement over the new Fashion island.

I saved Sadness for last because the whole movie is about finding Sadness’s role and place in the Community of Riley’s Brain.

Joy stumbles in the beginning trying to explain Sadness’s role…

The most obvious choice would be a Type 4, but let’s not be stereotypical and let’s talk this through.

Sadness expresses a lot of Anxiety and Panic Spiraling, which could suggest the Fear triad, but since every type has a Core Fear, let’s dig a little deeper.

Her movements are slow and she struggles to find the energy to function, which could suggest the Withdrawing triad (4,5,9).

But she is mostly in touch with Emotions and relies on them to tell her what her next move is going to be which suggests the Emotional Intelligence triad (2,3,4).

It isn’t that she fixates on sadness, but that she is comfortable with sadness.

"Crying helps me slow down and obsess over the weight of life's problems."

Life’s Problems are going to come, but we cannot overcome something that we cannot acknowledge fully.

And that is the role Sadness plays in Riley’s Brain.

When Joy tried to cheer up Riley’s imaginary friend, Bing Bong, by being goofy and trying to make him laugh, the more he stayed stuck in his sadness and disappointment.

But when Sadness had empathy for him, he had a good cry (much to Joy’s chagrin). Sadness didn’t just let him be sad, but let him remember how much fun he had had with Riley in the past and allowed him to mourn. Then he was ready to move on.

So for Riley's brain, Sadness is the Type 4.

I try not to be stereotypical, but my favorite Sadness personality Enneagram quote is:

Just like I wouldn’t with kids IRL, I am not going to attempt to type an 11-year old.

However, I do want to discuss this idea of Integration.

This movie, Inside Out, portrays how we have a little of each type inside of us. We have the ability to connect with each Enneagram Type by accessing them.

Depending on your type, some of the other types are easier to access than others but when we are self-aware and making healthy choices when responding to stressors, accessing all 9 can be easy!

This is the journey that the Enneagram takes us on.

The Emotions in her brain were so obsessed with restoring the individual Islands of her brain, it didn’t occur to them that they could co-exist. When Sadness and Joy created a Core Memory together, the result was a single BIGGER Island that integrated the 5 individual islands!